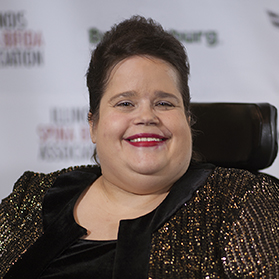 Read more about Carolee’s condition
In the United States, 1,500 to 2,000 of the more than 4 million babies born each year have spina bifida. It occurs when the bones of the spine (vertebrae) do not form properly around part of the baby’s spinal cord. Spina bifida literally means “cleft spine.” It can be mild or severe.

Carolee has spina bifida. “It’s the most common neural tube defect,” she says. “It causes me mostly mobility issues. I’m mostly paralyzed. I’ve lived on my own for almost 20 years.”

Growing up in a small town before the Americans with Disabilities Act (ADA) was passed meant all sorts of challenges. “Probably one of the biggest struggles I had was in the school system,” Carolee says. “Spina bifida affects your organizational skills. When you are learning your ABCs, they’d have these tiny little cards with the alphabet on them. The teacher would put words up on the board. You were expected to copy them.”

“Well, I would see just this great big pile of mixed up letters, and it just made no sense to me. I couldn’t organize it in my head. They ended up putting me in a special education class. They didn’t know what to do with me.”

There were other times the system didn’t know what to do with Carolee. Like many with spina bifida or spinal cord injuries, her bladder had to be emptied with a catheter, a process called clean intermittent catheterization. “They didn’t want the nurse involved,” she says. “They wanted me to do self-catheterization – to do it myself. And they wanted me to do it in a janitor’s closet.”

It’s no wonder that, growing up, Carolee felt like the only person with a disability in the entire town. “I became a loner,” she says. “And, to this day, I’m still somewhat of a loner. I’ve come to accept it now.”

Carolee also calls herself a computer geek. “Mostly because of my disability, I couldn’t really participate in sports,” she says. “I couldn’t do the whole cheerleader thing, so I was more with the geeks and AV people, that sort of thing.”

“I was born at a time when the parents of a child with a severe disability would be encouraged by the medical staff to basically forget about the child. In my case, the doctors didn’t think I would ever walk or talk or be able to care for myself. They basically said, ‘Just walk away.’ My parents, thankfully, decided not to do that.”

Although Carolee attended school with everyone else her age, it wasn’t “until late in my high school years that they started to transition me out of the special education classes into mainstream classes,” she says. “I had to attend math and science.”

And, in those classes, she really struggled. “We now know that people with spina bifida have difficulty in those areas,” she says. “But we didn’t know that at the time.”

In addition to the academic challenges, the high school building itself, and the “mean girls” left the experience of high school with a lot to be desired. “High school girls can be real witches,” Carolee says. “I know they weren’t singling me out personally. But in high school, unless you’re absolutely perfect and in the popular crowd, you’re basically fodder for everybody else.”

Carolee described how negotiating her way around the high school was difficult and isolating. “The school was two floors, and the only elevator that it had at the time was an old freight elevator,” she says. “You had to pull the gate down and separate these great big doors.”

The Americans with Disabilities was passed around this time. “So, as soon as the ADA was brought into law, I actually went to the superintendent of schools (bypassing her principal),” she says. “And I said, ‘I’m not leaving until you agree we have to get an elevator!’”

Carolee made her point, and the work proceeded. “That would have been my sophomore or junior year, so about midway through my senior year, we actually had a working elevator,” she says. “I would bribe the construction workers with brownies and be like, ‘Guys, could you move it? Like, come on! Before I graduate please? I’d like to enjoy it!’”

As an adult, Carolee finds life in the big city to be more accommodating. “The only place I have a problem is on the buses,” she says. “I might run into a bus driver who is having a bad day or maybe he’s just ignorant. I’ll try to get on the bus and he’ll say, “Oh no, no, no, the ramp is not working.’ But it’s one of those where you can either flip the switch and have it automatically come out, or you can just pull on a little leather strap and pull it out manually. Maybe the bus is full and he doesn’t really want to make people move to make room for me. There are still things like that I experience.”

Carolee takes all these experiences and works to make life better for everyone – from fighting for an elevator in her youth, to volunteering as an adult at the Illinois Spina Bifida Association and working on Chicago’s Disability Pride Parade.